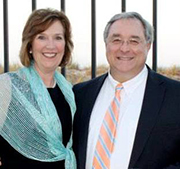 Louise Watkins joined the GGC Foundation Board of Trustees in the spring of 2014. She was born and raised in Lake Wales, Florida. Louise attended Erskine College and graduated with a BS in Home Economics. After graduating Louise married Bill Watkins. They have been married for 34 years. Bill is an attorney with the GMI Holding, Inc. Together they have raised 5 children; Brock (married to Cortney) who is an attorney living in Atlanta; Kennedy (married to Nathan) living in Columbia SC and working as a Spanish teacher, raising Louise’s three “adorable” grandsons; Emeline who lives and works in Greenwood; Kathleen who is graduating from Erskine College this spring; and, Hunt who is finishing his junior year at Wofford College.

Louise says she has “always been involved in a church, wherever we have lived” and is currently a member of Westminster Presbyterian Church. She is a charter member of “Morning Glory” garden club and after initiating its charter, has twice served as President. Her hobbies include sewing, playing bridge, and enjoying outdoor activities with her family. While raising her family, she also worked outside of the home. Louise has served as a teacher, and a tutoring coordinator. Louise is currently a Meeting Planner for Positive Management Leadership (PML), and travels domestically and internationally with her work.

When asked why she feels strongly about helping the Greenwood Genetic Center, Louise responded, “In the past I had an opportunity to need the support and help of genetic counseling. Dr. Steve Skinner and The Greenwood Genetic Center provided a very high level of service to me and gave me the resources to deal with my concerns. So when asked to serve on the GGC Foundation Board I was honored to be able to give back to this great organization.”