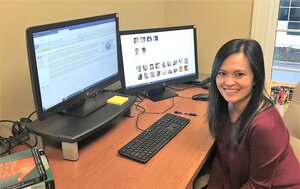 Clinicians rely on characteristic facial features and other physical traits to help them make an accurate clinical diagnosis as well as to determine which
genetic tests provide the best chance of achieving a quick and accurate answer. Published papers describing various genetic disorders are a useful
tool in assisting clinicians with recognizing these characteristic features.

Historically, most textbooks, case reports, and other journal articles that describe genetic disorders have primarily published images and descriptions
of patients of Northern European descent as the standard. In recent years, these images have also been used to train syndromic facial recognition software
programs that assist clinicians with syndrome identification using artificial intelligence technology.
In 2016, geneticists at the National Institutes of Health (NIH) shared their concern over the lack of diversity seen in these resources and expressed concern
that this bias in syndrome recognition may lead to delays in diagnosis for patients of other ethnic and racial groups and precious time lost in managing
associated health and developmental issues.
Over the past three years, several GGC clinicians including EJ Prijoles, MD, Assistant Clinical Geneticist
in GGC’s Columbia office and Roger Stevenson, MD, GGC Senior Clinical Geneticist and Ravenel
Curry Endowed Chair in Genetic Therapeutics, have contributed to an international effort led by Max Muenke, MD and Paul Kruszka, MD of the NIH, to
better delineate the features of genetic disorders in diverse populations.
The NIH has developed a free web-based reference tool ‘The Atlas of Human Malformation Syndromes in Diverse Populations,’ which serves as a resource for clinicians worldwide. Clinicians are invited, with patient consent, to upload clinical descriptions and photographs
of individuals with various genetic disorders from diverse populations around the world.
“A systematic collection of genetic disorders showing individuals with different ethnicities and backgrounds is extremely valuable in our expanding world,”
said Prijoles (pictured above). “By understanding the different presentations of genetic disorders among populations around the world, as well as the
within our own diverse communities here at home, we will be better able to serve our patients.”
The group’s first paper, focusing on Down syndrome, was published in 2017 in the American Journal
of Medical Genetics, and since then the clinical features for six other conditions, Turner syndrome,
Cornelia de Lange syndrome, Williams-Beuren syndrome,
Noonan syndrome, Rubinstein-Taybi syndrome,
and 22q11.2 deletion syndrome, across a variety of ethnic backgrounds have been analyzed and
shared.
“The clinical geneticists and counselors at GGC are proud to participate in this ongoing initiative,” said Stevenson. “We are so appreciative to our patient
families who have allowed us to share photos and clinical descriptions thereby advancing knowledge of genetic syndromes across all populations.”
BACK
SHARE