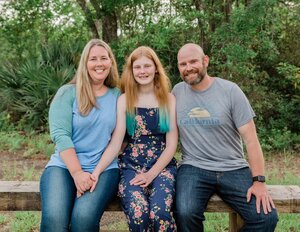 Chloe Murphy’s parents had been concerned about her balance from the time she started walking. Then came strong hand and eye tremors. Through the years, Chloe, now 15, has also experienced seizures and learning delays.

The Murphys of Bluffton, SC have looked to multiple medical specialists and Chloe has undergone numerous EEGs, blood tests, and genetic testing.

Initial genetic tests were normal, until at 12 years of age, her geneticist, Dr. Mike Lyons of the Greenwood Genetic Center’s (GGC’s) Charleston SC office, suggested whole exome sequencing, which analyzes all 20,000 human genes. In Chloe, this test identified a variant in a gene called NUS1. NUS1 has previously been associated with a condition of intellectual disability and seizures and is a potential contributor to Parkinson’s Disease.

“Chloe’s test results identified a variant in this NUS1 gene, but it was a variant that no one had seen before, so we weren’t sure that it was the answer,” said Lyons. “We reached out to the research team at GGC to help clarify its meaning.”

“This was a gene that we were very interested in studying,” said Rich Steet, PhD, Director of Research at GGC. “We ran experiments on skin cells from Chloe and were also able to find two other patients with NUS1 variants and similar symptoms.”

Studies in skin cells showed that the amount of the typical protein produced by the NUS1 gene was reduced in all three patients. Their skin cells also accumulated excess cholesterol in lysosomes.

The research team also developed zebrafish models that mimicked the NUS1 variants seen in these patients.

“Zebrafish and humans share approximately 70% of the same genes, so we can study the effects of human genetic variants in an animal model,” said Heather Flanagan-Steet, PhD, Director of Functional Studies and Director of the Hazel and Bill Allin Aquaculture Facility at GGC. “Studying how NUS1 variants affected the zebrafish provided powerful information, confirming that these variants in our patients were indeed the cause of their symptoms and allowing us to better understand how these variants cause disease.”

GGC’s zebrafish studies showed that the fish also accumulated cholesterol in their cells and, through a tool called a Zebrabox, scientists were able to analyze behavioral swimming patterns in the fish, akin to the movement symptoms exhibited by the patients.

“When we compared the wild type fish to those with the NUS1 mutations, we found that those with the mutations displayed abnormal swimming behaviors including slower swimming and staying near the edges of the swimming area,” said Flanagan-Steet.

Flanagan-Steet shared that in some cases, they can also identify drugs that may rescue the abnormal features in the fish. They can test these drugs on the fish before considering them for human trials.

“These studies not only confirmed that this variant was indeed the cause of Chloe’s symptoms, providing a long-awaited answer for her family, but they also gave us the opportunity to better understand this rare diagnosis and consider potential treatments,” said Lyons.

The Murphy family has found hope through their research participation.

“Our journey so far has been to find the ‘why.’ We felt like once we could determine this, we could better understand what could help Chloe,” said her mother, Jessica. “Our hope now is that these breakthroughs with NUS1 will lead to a solution to improve her health.”

This work was supported by the Greenwood Genetic Center and grants from the National Institutes of Health. It was published in Genetics in Medicine, the official Journal of the American College of Medical Genetics and Genomics.

Top photo: Chloe Murphy with her parents, Jessica and Patrick. 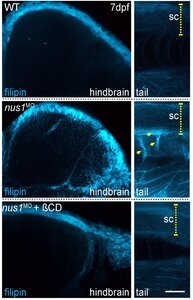