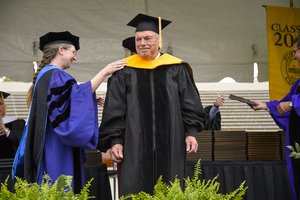 GGC Director, Steve Skinner, MD, was awarded an honorary Doctor of Science degree from Wofford College at their spring 2021 commencement exercises. Skinner graduated from Wofford in 1975 prior to enrolling in medical school. He joined GGC as a pediatrician and medical genetics resident in 1987 and became director in 2011.

“Steve has a gentle manner and genuine care for each patient he encounters and has been a driving force in GGC’s commitment to treating genetic disorders,” said GGC cofounder, Roger Stevenson, MD. ” Since assuming the role of director, he has worked tirelessly to expand GGC’s impact, both medically and economically through the development of treatment initiatives and partnerships.”

“The honorary degree is the highest form of recognition offered by the college,” said Nayef H. Samhat, President of Wofford College. “We are indeed grateful to Dr. Skinner for his important and scholarly work throughout his distinguished career that has brought reflected honor to his alma mater.”

Honorary degrees were also presented to former Wofford College Trustee Jim Bostic and Dr. Will Gravely, a 1961 Wofford graduate and a University of Denver professor emeritus of religion.