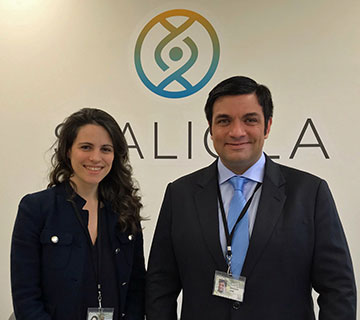 Boccuto to be Chief Scientific Officer

STALICLA has developed an innovative algorithm platform based on big data to bring precision medicine to subtypes of ASD patients.

“Over the past 10 years, evidence has accumulated pointing towards alterations in molecular pathways that lead to abnormal cell functioning in ASD,” said Lynn Durham, CEO of the Geneva-based company. “At STALICLA, we are looking to bring disease-modifying personalized medicine to patients with ASD, one subgroup after the other.”

Durham learned about GGC’s similar approach to ASD research through a 2017 TEDx talk on personalized medicine by Luigi Boccuto, MD, Assistant Research Scientist at GGC’s JC Self Research Institute. In the talk, Boccuto discussed GGC’s findings of the heterogeneous biochemical nature of ASD and that a one-size-fits-all approach to treatment would not prove effective.

Durham said that she recognized through the brief TEDx talk that there was an alignment between GGC’s approach to autism and the philosophy of her organization.

Durham and Boccuto, a native of Italy, met in Rome last fall, followed by a visit to GGC and then Geneva for collaborative discussions.

“I’m excited to start this project because of the potential revolutionary impact the STALICLA approach offers,” said Boccuto, who was named Chief Scientific Officer for STALICLA. “The innovative characterization of ASD patients will act as a catalyst to change research approaches for the treatment of ASD and potentially other neurodevelopmental disorders.”

The collaborators are recruiting new samples and collecting clinical information from the individuals currently in their cohorts. Work has already begun at GGC using several novel technologies to expand the understanding of the etiology and mechanism of ASD.

“Our cohorts will be incorporated into future clinical trials to generate data in support of STALICLA’s STP1 therapy which is poised to show disease-modifying effects in approximately 15% of the ASD patient population,” said Boccuto.

GGC anticipates being the first clinical site for randomized control trials for STP1.