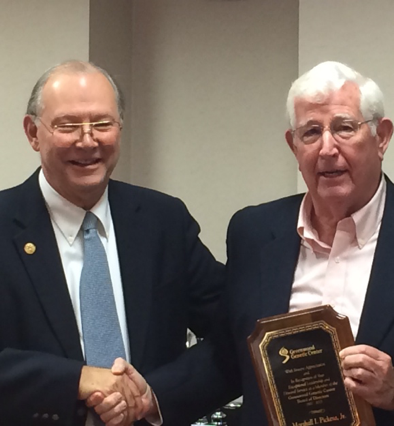 The Greenwood Genetic Center (GGC) Board of Directors and the GGC Foundation Board of Trustees recently recognized Marshall I. Pickens of Anderson for his service as he retires from both boards.

Pickens, retired president of Ramseur Oil Co. in Anderson, joined the GGC Board of Directors in 1997. “Marshall has brought his extensive experience in matters of business and finance to the GGC Board,” said John Hunt, MD, GGC Board of Directors Chair, also of Anderson. “His steady leadership has seen the Center through various crucial periods of growth as it has become an internationally respected leader in medical genetics.”

Pickens departs the Board as the current Chair of the Nominating and By-Laws Committee and as a member of the Personnel Committee. He has previously served on the Board’s Finance Committee. Pickens has also served as a trustee of the GGC Foundation Board since its inception in 1998.

Jane Charles, MD is also stepping down from the GGC Board of Directors after working with the Center since 2007. Dr. Charles is a developmental pediatrician at the Medical University of South Carolina where she specializes in the diagnosis and care of children with developmental disabilities and autism spectrum disorders. Dr. Charles has served on the Center’s Long Range Planning committee guiding the scientific goals, particularly as they relate to autism services and research.

“Marshall and Jane have each provided GGC with instructive advice, helping us to advance our mission of providing the most advanced care to patients and their families” shared Steve Skinner, GGC Director. “We appreciate their dedication and service to GGC.”

Photo Caption: John Hunt, MD (left) presents a plaque of appreciation to Marshall Pickens at his final board meeting in December.