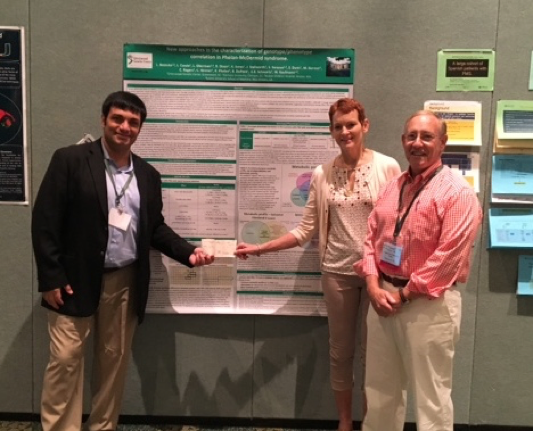 The team presented new methods to better characterize this complex and variable genetic disorder.
Phelan-McDermid syndrome is caused by chromosomal rearrangements involving the end of chromosome 22. The size of the rearrangement is variable between patients and may involve only a single gene or can include multiple genes. Patients express a wide spectrum of clinical findings, including severe developmental and speech delays, intellectual disability, poor muscle tone and autistic features.

“Phelan-McDermid syndrome has been challenging for physicians and researchers to understand because of the wide variability of symptoms and the multitude of specific genetic changes that exist in this population,” said Boccuto. “By using our approach of screening patients using neurobehavioral testing, looking at the preserved copy of seven genes in the region usually involved by the rearrangement, and assessing metabolic profiles of these patients, we have been better able to understand which genetic changes can modify the severity of the symptoms. That gives physicians more tools in providing a clearer prognosis and also points us toward potential treatments for this rare condition.”

The cause of Phelan-McDermid syndrome was first identified by Katy Phelan, PhD in 1992 when she was a laboratory director in Greenwood. Since that time, GGC has been a leading research institution for patients impacted by this disorder and has worked to uncover genetic changes in these patients, characterize the features of the disorder, and research potential mechanisms that could lead to treatments. GGC has also provided family support opportunities and worked closely with families in the creation of the Phelan-McDermid Syndrome Foundation.

“The Phelan McDermid Syndrome Foundation has put together a wonderful meeting for families to come together, share experiences and hear from the scientists who are working to find a treatment for this condition,” said GGC’s Curtis Rogers, MD, a co-author on the winning poster and speaker at the conference. “GGC has a long-standing interest in Phelan-McDermid syndrome, and we are pleased to be able to contribute to any work that is ultimately going to benefit these amazing families.”