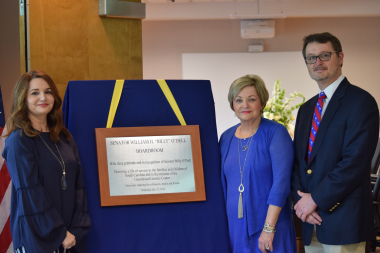 SC State Senator Billy O’Dell was honored on Wednesday as the Greenwood Genetic Center dedicated the Senator William H. “Billy” O’Dell Boardroom. GGC faculty
and staff as well as many of Senator O’Dell’s family, friends, and employees were on hand for the dedication. Senator O’Dell served the Greenwood area
in the SC State Senate for 27 years until his death in January of 2016.

“Throughout his tenure in the legislature, Senator O’Dell was a champion for the Greenwood Genetic Center and all of the patients and families we serve,”
said GGC’s Director, Dr. Steve Skinner, at the naming ceremony. “His calm and steady leadership and enthusiastic support of our work helped us to launch
several initiatives that have advanced research progress and treatment programs for patients across SC.”
Skinner said that Senator O’Dell’s support has allowed GGC to expand in several key areas including growth of the Center’s metabolic treatment program
which provides life-saving therapies for patient with metabolic disorders, the expansion of Greenwood’s campus through the SC Center for the Treatment
of Genetic Disorders, and funding to construct the recently-opened Clemson University Center for Human Genetics on the Center’s Greenwood campus.
SC Senator Floyd Nicholson of Greenwood also shared O’Dell’s support of GGC. “By Billy having that passion for this facility, he had an impact on so many
lives throughout our community, our state and the world.”
John Stroud, CEO and President of O’Dell Corporation, spoke on behalf of the O’Dell family sharing that Senator O’Dell was always so passionate when talking
about the Greenwood Genetic Center. “To put his name above a door here would make him more proud than anybody could imagine.”
Skinner presented a plaque that will hand in the boardroom and noted, “His influential voice in the SC Senate helped to ensure that GGC can provide access
to genetics services to all South Carolinians who are impacted by a genetic disorder. It is fitting that GGC’s leaders will see his name and be inspired
to follow his model of compassion and leadership every time they convene in this room to discuss the future of our Center.”

Photo above: Sen. O’Dell’s wife, Gayle O’Dell (center), and their children Michelle Foster and Chip O’Dell in front of the room that will bear Senator O’Dell’s name.

Photos below: Skinner, Nicholson and Stroud all pay tribute to the impact of Senator O’Dell on the mission and vision of the Greenwood Genetic Center.