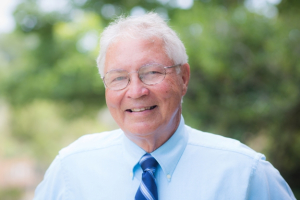 Stevenson’s new role at the GGC will involve overseeing the growth and development of the Center’s treatment initiatives. He will be supporting several
cores of GGC’s existing treatment programs including birth defects prevention, newborn metabolic treatment, enzyme replacement therapies, and clinical
trials. His primary focus will be on novel treatments such as gene therapy and gene editing.

Stevenson will work closely with GGC faculty and staff to grow the Center’s involvement in advancing treatments and prevention strategies for patients
to reduce the prevalence and impact of genetic disorders. He was instrumental in the development and success of the state-wide Neural Tube Defect Prevention Program and has more recently been involved in exploring potential treatment approaches for autism.

Stevenson and retired laboratory director, Hal Taylor, PhD, formed the Greenwood Genetic Center in 1974 with support from Greenwood businessman and philanthropist
Jim Self and the SC Department of Disabilities and Special Needs. Since that time Stevenson has led the Center to international acclaim in clinical
services, diagnostic testing, research, and educational programs.

“The Greenwood Genetic Center can attribute its growth and success directly to the vision of Dr. Roger Stevenson,” said Steve Skinner, MD,
Director of the Center. “We have done an international search to fill this very important position, but sometimes the best person for the job is already
right in front of you. Dr. Stevenson possesses both the vision and passion for where we want to go, as well as the ability to pull together the resources
and collaborations to help lead us there.”

Stevenson worked closely with the late Ravenel Boykin Curry, a prominent Greenwood developer and businessman, who was on the Center’s founding Board of
Directors. “I will strive to honor Boykin’s memory by connecting his legacy to one of progress and compassion as we work to improve the lives of individuals
with genetic disorders,” he said.

“Dad always had a great respect for Roger’s skill and vision for the Greenwood Genetic Center, and he was so proud to have been associated with him and
this organization,” said Ravenel Curry of New York City who established the endowed chair in honor of his father.
“I have no doubt that Roger will make great advances in this new role that will impact generations of families to come.”
Stevenson’s position officially began October 15th. He replaces Walter Kaufmann, MD who held the position from 2015-17.
BACK
SHARE