This targeted panel of 93 mitochondrial DNA variants includes 29 known pathogenic variants with an additional 64 variants which will be considered for interpretation in the analysis.

Below is a list of 93 variants which are considered in the analysis. The variant “m.7445A>G” is located at the boundary of two genes, MT-CO1 and MT-TS1, and is commonly considered as two variants. 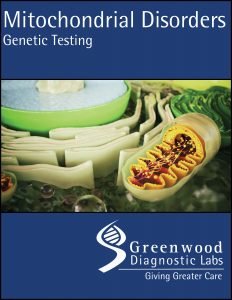 For patients with clinical suspicion of a mitochondrial disorder, molecular testing is useful to confirm the diagnosis and to identify the disease causing mutations within a family to allow for carrier testing. Individuals with Pearson syndrome or KSS and some patients with CPEO have large-scale (2-10 kb) mtDNA deletions, which will not be detected by the protocol used for this test.

Variants included in this panel account for >80% of MELAS, ~90% of MERRF, ~95% of LHON, ~ 50% of NARP, and ~ 20% of Leigh Syndrome cases. See Brochure for a breakdown of which variants account for what portion of each condition. Note: This test may not detect variants with a heteroplasmy of less than 10% using NGS. It is not possible to confirm all reported variants by Sanger sequencing because levels of mutant heteroplasmy 20% or lower may not be detected by Sanger. Additionally, levels of mutant heteroplasmy above 80% will appear homoplasmic by Sanger sequencing. Although this test is capable of collecting data on variants at other loci in the mitochondrial genome, it does not evaluate for variants other than those listed above. Additional variants which may be present in the patient are not reported with this test. Additionally, large deletions or duplications in the mitochondrial genome are not identified with the current sequencing protocol. As heteroplasmy levels vary from tissue to tissue, a negative blood test cannot completely rule out the chance that an individual carries a mtDNA variant that is either at very low heteroplasmy levels in blood or present in a different tissue type.

The required sample type is peripheral blood collected in an EDTA (purple top) tube - at least 2-3ml for pediatric patients and 5-6ml for adult patients. A maternal sample is requested to aid in interpretation of the 64 additional variants on this panel. Maternal testing is performed free of charge. Maternal sample can be banked upfront to allow reanalysis if a variant is identified in the patient, or a maternal sample can be obtained after a variant has been identified in the proband, at which time an updated report will be issued for the patient.