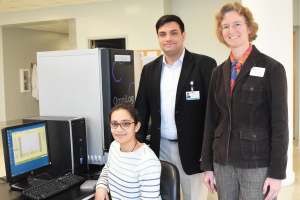 The nearly $10,000 award will support the work of Lavanya Jain, a doctoral student in the Healthcare Genetics Program in Clemson’s Department of Nursing.
Jain is conducting her graduate research at GGC on Phelan-McDermid syndrome, a rare disorder that was
first identified by GGC scientists in 1992. The disorder is most often caused by a missing segment of chromosome 22, involving up to 150 genes.
Individuals with Phelan-McDermid syndrome have a variable clinical course. All have developmental delays and nearly half also have autism spectrum disorder,
seizures, and/or sleep disturbances. There is currently no treatment.
“Our project aims to build a bridge between what is happening in the cells of these patients and what is observed clinically,” said Jain. “We expect to
generate results that will lead to more personalized and successful approaches in the clinical management and treatment of patients with Phelan-McDermid
syndrome.”
The SEED grant will provide for the purchase of reagents and supplies for Jain’s laboratory work which will correlate clinical, genetic and metabolic data
on a group of 25 patients with Phelan-McDermid syndrome. Data analysis will help identify subgroups of patients and provide data for future treatment
initiatives for Phelan-McDermid syndrome.
“In order to move toward a personalized therapy for these patients, it is critical that we better understand the role of each genetic alteration, as well
as identify metabolic changes that could point us toward potential targets for therapy,” said Boccuto. “This work will allow us to better categorize
patients with Phelan-McDermid syndrome and identify therapeutic targets that could impact not only those with this rare disorder, but also others with
autism, seizures, and/or sleep disorders.”