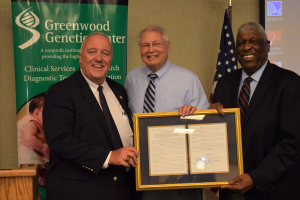 The award recognized Stevenson for his vision in founding and leading the Greenwood Genetic Center to international acclaim inclinical services, diagnostic
testing, research, and educational programs.

To further celebrate this significant national award, Senators Floyd Nicholson and Mike Gambrell introduced a resolution in the SC Senate to recognize
this achievement. Nicholson and Gambrell presented the resolution to Stevenson at a Greenwood Genetic Center statewide meeting on Wednesday in front
of his GGC colleagues and family.

“It’s so important that people know that people from our state are making contributions that affect people throughout the entire world,” said Nicholson.
“The research that Roger has been involved with has impacted so many lives, to make people’s live better.”

Sen. Gambrell added, “We can’t say enough about Dr. Stevenson, what he’s done here and what this facility means, not only to the state of South Carolina,
but also to the United States and the world.”

Stevenson accepted the resolution and addressed comments to his colleagues gathered in the room. “Anytime recognition comes to an institution like this,
you have to realize that we are standing on the shoulders of scientists, researchers, and clinicians who have gone before and paved the way. But we
don’t usually get to meet and know them,” said Stevenson. “But there is a group that I got to meet and know, and that’s this group. That’s what this
institution is about – all of the work that you do allows this recognition to come the Center.”

Since relinquishing role of GGC Director in 2011, Stevenson continues in active clinical practice and remains involved in research, particularly as it
relates to treatment of genetic disorders. He currently serves as the Ravenel Boykin Curry Chair in Genetic Therapeutics at GGC overseeing the Center’s
treatment initiatives and working toward the development and delivery of novel treatments such as gene therapy and gene editing.